In 2021, Lithuanian airports handled almost 2.5 million passengers, 37% more than in 2020, when they handled just over 1.8 million. According to aviation experts, in 2021, aviation flows at Lithuanian airports grew in almost all main categories, with the active phase of recovery starting in the middle of the year.

“In 2021, the European aviation market was still forced to react to the pandemic and the changing means of managing it. However, the aviation sector has been flexible enough to adapt its activities to emerging challenges. The airlines have been very active in monitoring the situation, adapting to the existing demand, and some companies have even managed to increase their business volumes by competing more aggressively in the market,” said Aurimas Stikliūnas, the Head of the Aviation Services Division at Lithuanian Airports.

He said that the recovery of the European aviation sector has benefited greatly from the large-scale support packages provided by States to maintain airline operations and compensate for losses, and that the introduction of the international COVID-19 passport at European level has also had a major positive impact.

“With the harmonisation of travel requirements in the middle of the year, we have seen the aviation sector recovering at a much faster pace than before, as illustrated by the huge increase in passenger and flight flows since July. In the second half of 2021 alone, the number of passengers at airports reached 2 million,” said A. Stikliūnas.

He also added that at the end of 2021, Lithuanian airports recorded around 80% of the pre-pandemic number of flights (as of December 2019). According to A. Stikliūnas, this shows that even the challenges posed by new strains of the virus have not been a major factor stopping aviation, and that airlines' supply to the market has maintained its upward tendency.

“When looking at the results, it should be understood that the beginning of last year was very slow due to the very strict travel restrictions in Europe and it was not until the middle of the year that the real turnaround for the better happened. In terms of recovery volumes, comparing statistics with the pre-pandemic period, in some periods last year we were even among the fastest recovering airports in Europe as a whole,” says Aurimas Stikliūnas, the Head of the Aviation Services Division at Lithuanian Airports.

Compared to 2020, the share of cargo transported through Lithuanian airports grew by 3% last year, with the 20,000 tonne mark being crossed in 2021.

In terms of the country’s overall accessibility, the number of destinations at Lithuanian airports in 2021 exceeded the pre-pandemic level. Last year, 94 direct regular destinations were offered, compared to 72 in 2020 and 92 in 2019. Regular flights to the most popular countries: United Kingdom, Germany, Norway, Denmark, Ukraine and Germany. 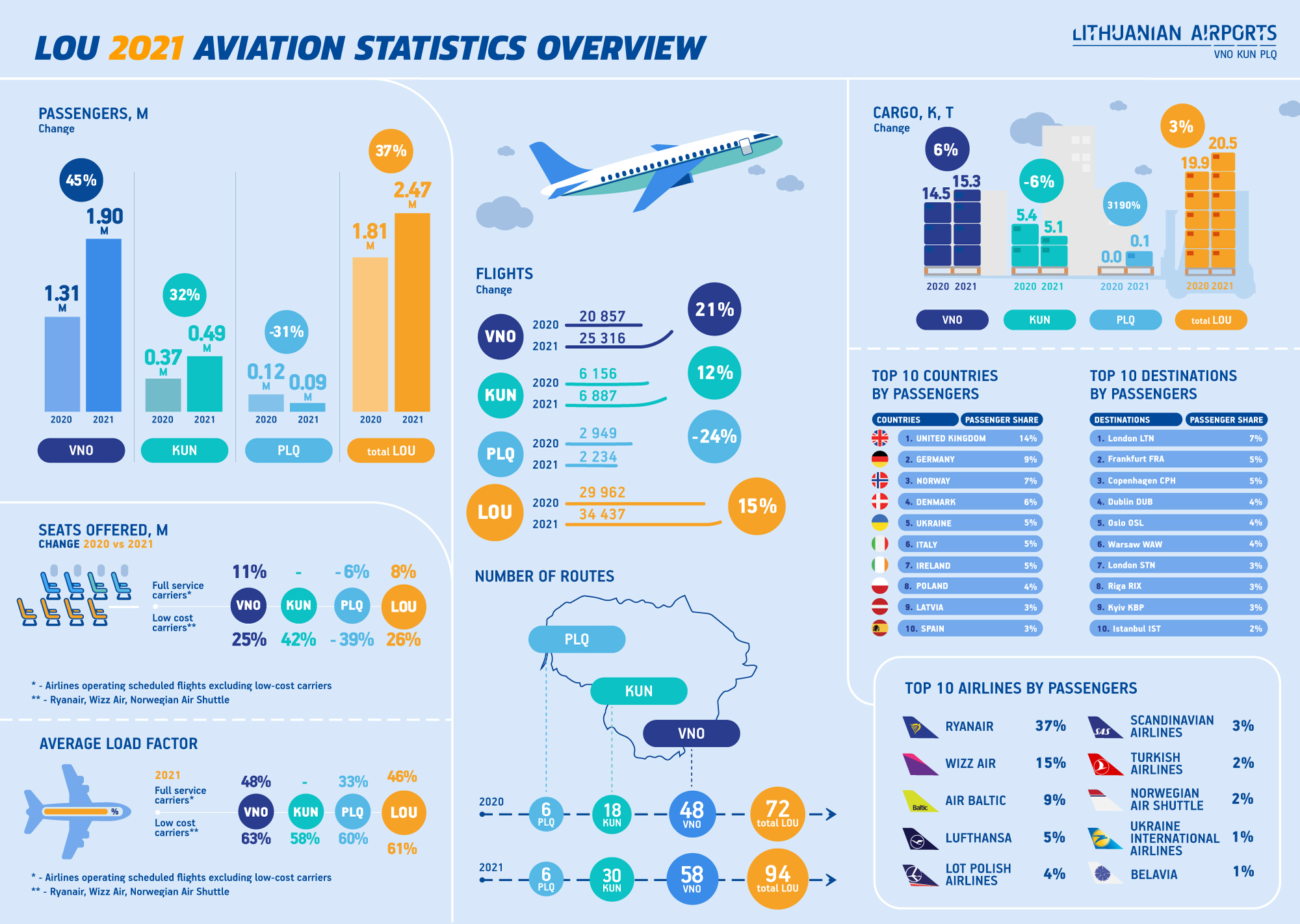 As we enter a new year in the aviation sector, we expect to continue to maintain consistent growth and ensure that airport priorities are met.

“Security will remain our priority next year. The pandemic is not over yet, so our goal is to continue to make safe travel possible, and we will focus on this. Taking into account the needs of Lithuanian business and tourism organisations, this year we will strive to further develop connectivity with the major aviation hubs - airports, as well as to adapt the existing ones and to look for new ways to stimulate the inbound passenger flow, we will adjust the common promotional strategies and packages for the carriers, but from the overall point of view, we will stick to the chosen and successful path - to develop the activity of the base carriers,” said A. Stikliūnas.

The Head of the Aviation Services Division at Lithuanian Airports also said that a strong growth in travellers and flights is expected this year.

“We predict that the number of travellers in the network of Lithuanian airports will reach 4.2 million in 2022, which could represent a 70% growth compared to 2021. We also expect to achieve a 43% growth in the number of flights in the category, thanks to the harmonisation of travel rules and the continued consistent implementation of our flight promotion strategy. We plan that Lithuanian Airports will be able to handle almost 50,000 flights in 2022”, said A. Stikliūnas.

He also recalled that in 2019, during a record-breaking period, Lithuanian airports handled 6.5 million passengers and more than 62,000 flights.